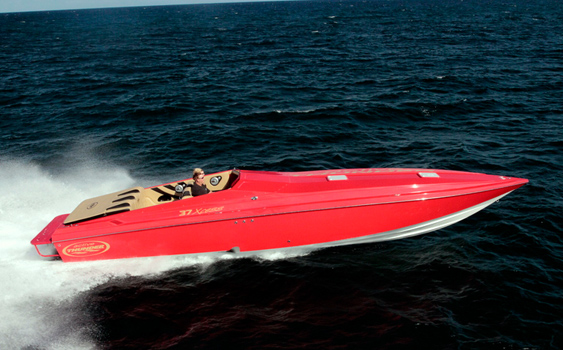 For the first time in four years, Active Thunder will have a presence, led by the latest 37 Xcess, at the Miami International Boat Show next month.

Despite that he saw other high-performance powerboat builders surviving and even thriving by offering center-console models during the past few years, Patrick Haughey, the owner of Active Thunder Boats in Pompano Beach, Fla., was never tempted to take his company in that direction. Not for one moment, not if hell froze over (and it just may have in the past two weeks). No way.

That’s because as anyone who knows him can tell you, Haughey is a hardcore go-fast boat guy who has created a solid line of semi-custom performance V-bottoms that have developed a cult-like following over the years. To Haughey, the idea of a center-console Active Thunder is—even to survive—sacrilege. He breathes performance. Same goes for the Active Thunder faithful.

“We build the boats out of the love of go-fasts and my heart had no interest in building center consoles, whether that was a good business decision or bad,” said Haughey.

Instead, Haughey decided to scale back his business operation a few years ago with the go-fast boat market appearing to be in an economic death spiral. Active Thunder had little-to-no overhead and Haughey had other sources of income, so rather than go the center console route, Haughey let his company go mostly dormant—though never dark—and ride out the economic storm.

The first 33 Evolution with an inner liner will be on display in Miami.

“I just never believed the storm would last so long,” he said, then laughed. “But coming out of 2013 and going into 2014, I feel it is time to ramp it back up. I have set aside an advertising budget for the on-line forums as well as a website budget to begin revamping activethunderboats.com. February will be the first time in four years that we are investing in boat shows. This year will be a key barometer for sales and, more importantly, consumer lending which should become apparent at the Miami Show. The guys buying the smaller boats generally are motivated to purchase if they don’t have to dig into their pockets. Hopefully, lenders are loosening up.”