Anatomy of a Debut: Inside the Formula 353 and Ilmor 570 Project 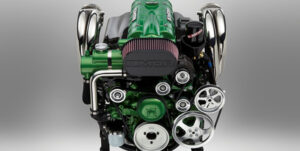 It’s no accident that Ilmor Marine chose a Formula Boats 353 FAS3Tech sportboat to showcase its first two production MV8 570 engines during the Miami International Boat Show this week. That a heavy—we’re talking 9,600 pounds—35-foot stepped V-bottom is the debut platform for the lightweight—we’re talking 830 pounds each without the IMCO Marine drives—570-hp engines makes perfect sense.

“The high-performance powerboat market was not built on $1 million catamarans with turbine engines—they are the anomaly,” says Paul Ray, the president of Ilmor Marine in Plymouth, Mich. “Ten years ago when we got into this market, a 25- to 27-foot catamaran or V-bottom was a really popular and substantial boat. To rebuild this market and bring it back, we have to enable people to enter this sport at a price point that makes sense.

“If the high-performance market is going to come back, the smaller-boat segment of it has to come back,” he adds. “In looking at our own engine portfolio it was easy to see there was a huge gap, in price and horsepower, between our catalyzed 522-hp V-8 engine and our 650-hp V-10 engine. So we said, ‘Let’s take our 522-hp engine and beef it up to somewhere in the 565- to 570-hp range.’ ”

Now, no one is his right mind would argue that a twin-engine, production-built 35-footer that likely will price out in the low six-figure range is “cheap” or even necessarily “affordable” in average income quarters. But then, new high-performance powerboats have never been cheap or affordable. They never have been products of the masses. 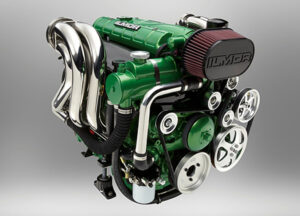 Towboats, on the other hand, have been—at least relatively speaking—a lot more reasonably priced. And that was the world in which the idea for the 7.4-litre MV8 570 was born. Almost two years ago, Ilmor began producing a catalyzed version of the 454-cubic-inch engine for well-known towboat builder MasterCraft.

“The story really started when General Motors announced it was going to drop the 8.1-litre platform completely,” Ray says. “MasterCraft had been using Indmar versions of it in their larger towboats for some time.”

“We did not want to develop the 6.2-litre engine for a number of reasons, supercharging versus going with a bigger, normally aspirated platform being one of them,” Ray explains. “We knew the engine had to be catalyzed. That was very important, and not just from an emissions-requirement standpoint. A lot of these boats are being used for wake surfing, and the last thing we want is a wake surfer three feet behind a 500-plus-hp engine spewing carbon.

“We have almost 300 of those engines in the field right now,” he adds. “They have been phenomenally successful and exceptionally reliable.”