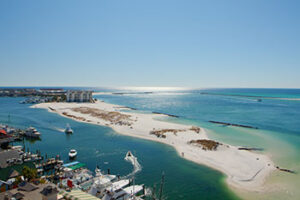 Intermittent thunder showers, which are typical of the August gulf coast climate, interupted some of the poker run activities throughout the weekend, but never dampened the spirits of over six hundred participants and hundreds of checkpoint volunteers that assisted with poker run logistics and fundraising efforts. Helicopters flew three consecutive days, as FPC member John Woodruff offered his flying time Friday in his Bell Longer Ranger, and Panhandle helicopters from Panama City Beach, flew Saturday and Sunday to photograph the awesome poker run fleet. A “no-fly” restriction due to President Obama’s Panama City Beach visit, forced Panhandle to “trailer” their Robinson R44 to Destin to cover the event!  Among the showstoppers on the course, were the Turbine Marine powered Statement! Passion Cat, and the colorful Outerlimits 46 Limited, owned by new member Jim Moore from Kentucky. The two teams took home Best Catamaran and Best Vee-Bottom respectively, while the coveted Sexiest Crew award went home with the ladies aboard Mike Fulgham’s 38 Formula “Yea Baby” from Texas.

All of the leading manufacturers and dealers were well represented at the event, including:

Cigarette Racing Team– Owner Skip Braver was in attendence, along with son Chad Braver.   In addition to a strong fleet of Cigarette owning participants, the factory featured the new 49 Gran Sport, powered by Cummins/Mercruiser diesels.

Legend Marine Group of Texas– Greg Connell has attended and sponsored the Emerald Coast Poker Run every year, since entering the marine industry as a dealer for at least six major brands, including Cigarette, Fountain and Donzi. With two boats on display in the poker run village, a Fountain 38 Sportfish and a brand new Cigarette 39 Top Gun, Greg was very pleased with the quality of the event and the caliber of the participants. Greg commented, “We just love attending this event every year, and we bring a lot of our customers here.”

Nor-tech Hi Performance: Co-owner Trond Schou was in attendence, along with Terry Sobo, featuring their latest version of the new 390 Center Console, along with a fleet of at least ten Nor-Techs. New dealer Scott Shogren came all the way from Chicago to attend, driving a 36 Nor-tech Supercat on the run.

Pier 57: David Woods and MTI owner Randy Scism were on hand once again, making AJ’s their homeport for a colorful fleet of of MTI’s, which included Tor Staubo’s new 48 MTI “Gasse” powered by Mercury Racing 1200’s. Tor traveled all the way from Norway with daughter Emma, who enjoyed her first poker run with Dad. After the run, he commented, “It was my first time here on the Emerald Coast poker run and it was well-worth the long trip from Europe! We went to all eleven checkpoints and this is such a beautiful place to go boating! We just loved it.”

Statement!: Nick Buis and the Statement crew featured their newest 42 Ultimate Vee-bottom in the Poker Run Village, and displayed their 50 Passion Cat in-water at AJ’s in Destin Harbor. On the Saturday run back from Juana’s, as the FPC chopper closed in on the turbine powered cat, it was apparent that Nick was not concerned about getting photographed, as he pushed the thottles forward to 160 mph, leaving only a rooster tail for the cameras’ viewfinders.

Sunsation Powerboats: With the Schaldenbrand brothers Joe and Wayne in attendance, an all-new 36 Dominator and the first ILMOR powered F4 made their way onto the poker run course. A second 36 Dominator was displayed at the Poker Run village, giving hundreds of performance enthusiasts the opportunity for a closer look. The all-new Dominator has set records for new boat orders, giving the Michigan-based boat builder some renewed hope for pulling through the economic recession.

Special thanks to FPC member Kelly Sills from Coastal Bridge Construction in Louisana for supporting the event with a poker run sponsorship program. Crossing paths at AJ’s on Friday evening, Kelly commented, “Hey I love coming to this event every year. I just wish more people would register and participate. I like participating and it’s also a great promotion for any type of company, not just marine.”Kelly and his crew enjoyed the poker run on his bright blue Nor-Tech 40 Roadster cat, powered by Mercury Racing HP1075’s.

A long list of other supporting sponsors participated with the Emerald Coast Foundation, with the 2010 presenting sponsor, the IP Casino Biloxi providing an outstanding $50,000 sponsorship donation earlier this year, and providing all participants with a complimentary weekend stay at the property. For more information, visit: www.ipbiloxi.com  For a complete list of Emerald Coast Foundation sponsors, visit: www.emeraldcoastfoundation.com

Winners and Prizes: The Grand Prize for the Emerald Coast Poker Run was a 2010 Ford Fiesta, sponsored by Gary Smith Ford of Fort Walton Beach. While many poker runners may have questioned the selection of an “economy” compact car, the sporty Fiesta raised eye-brows from both organizers and participants alike, with its shiny metallic orange paint and custom aluminum wheels.

The Final  Poker Table: After hundreds of poker hands were played out at the Saturday night bash at the conference center, for the first time ever, two ladies squared off in the final round, with Cher Floyd from Team INXS winning the Grand Prize, including the Ford Fiesta and a variety of sponsor prizes from Optima Batteries, Ocean LED and Florida Powerboat Club. Cher immediately astonished the crowd,  with an amazing act of kindess, donating the $20,000 automobile back to the Emerald Coast Foundation! This outstanding act of generosity has raised the bar for poker runs across the nation, and illustrates the enthusiastic spirit of the powerboaters that continue to support the Emerald Coast Poker Run event  year after year!  As Cher’s husband, John Floyd commented to us at the conclusion of the festive evening, “Stu, we get so much enjoyment from this sport and we love coming to this poker run! Cher and I, along with all the INXS crew, are here to support the Florida Powerboat Club and the Emerald Coast Foundation for as long as we live!”  To John’s comments, we reply simply…“Amen.”

Sunday Activities:  While the morning hours were rain-free, hundreds of boaters made their way to Crab Island for the Sunday festivities, which included the almost-famous Helen Back Chicken Fighting Challenge…where “stumps” the guys, and “feathers” the gals riding on shoulders, square off in a very physical, upright wrestling match. There’s nothing “powder puff” about this sport…with oven mitts on their hands to limit the bloodshed, the ladies fought a fearless battle, while the stumps struggled to maintain balance. All this and free pizza from Helen Back…it was quite the party! Later, a water ski show at Scully’s on the Bayou, entertained hundreds of participants.

The Sunday agenda concluded, with a free LYNYRD SKYNYRD Beach concert at the Boardwalk, where thousands congregated for a fantastic show that didn’t disappoint! The rain held off long enough for the concert to continue uninterrupted, and with a closing act that included Sweet Home Alabama, followed by Freebird, the crowd got what they came for, and went home satisfied!

Florida Powerboat Club wishes to thank all participants, sponsors, poker run volunteers and local resort operators for participation in the 18th Annual Emerald Coast Poker Run. In spite of the reduced attendence due to the economy and the recent oil spill, organizers feel that the fundraising efforts will still yield very positive results for local youth charities.  Hundreds of exciting party snapshots and aerial photos will be coming soon on the FPC photo galleries, here at www.flpowerboat.com. Stay tuned!