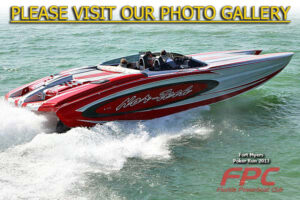 Since Spring of 2010, three years had passed since FPC had staged a poker run event in the Fort Myers Beach/Cape Coral area, and it was a long-awaited return to this beautiful part of the Sunshine State. Abundant cruising options in scenic protected waters has always made this area an ideal destination for all boaters, and just one weekend wasn’t enough for the twenty-five teams that converged on the Pink Shell Resort & Marina for this exciting occasion.

As expected, the new venue at the Pink Shell Resort on Estero Island, proved to be the perfect headquarters for the poker run. With all-new floating docks, top-line equipment and first class treatment from the marina staff, FPC members were impressed with the facility, which offered dockage for a wide array of boats, from 30 to 80 feet in length. Nearby marinas and boat yards provided necessary launching, trailer parking, boat ramps and fuel….making this a poker run- friendly destination in many respects. But it was the “total package”, including first classs resort accommodations, spacious 1-2 bedroom suites, excellent amenaties and breath-taking views of the wide sandy beach along the gulfcoast shores, that made this the perfect stop on the FPC Poker Run tour.

Friday featured a fun run for about a dozen poker run teams, with a short half-hour ride through the protected ICW waters of Pine Island Sound to the landmark Cabbage Key. This quaint, historic destination is loaded with nostalgia and offers great food from a staff of island dwellers who seem quite content with their remote cottage habitat, disconnected from the fast pace of mainland Lee County. But don’t underestimate this “remote” existance, as Cabbage Key was soon slammed on this sunny Friday, with transient boaters and large tour vessels, that dumped hundreds of visitors onto the island to enjoy the beautiful first day of Spring 2013!

Temperatures had warmed by Saturday, as the event launched shortly after 10am, and poker run teams gathered up their first card from the Pink Shell Marina, then headed out the Matanzas pass. The winds appeared light at first, but as the fleet rounded the southwest bend of Sanibel Island on the northbound leg of the run, the seas picked up and immediately put significant separation among the fleet.

The Nortech 477 Paceboat, with builder Trond Schou at the helm, didn’t seem to be phased by the seas at first, keeping the Performance-class boat at speeds near 70 mph.. But Mother Nature was taking the upper hand on this ride, and Trond soon brought the speed down to a more crew-comfortable 50mph, while focusing his attention on safe navigation. In minutes, a thick fog had settled in along the coastal route, making it almost impossible to see the Sanibel Island shoreline, which was less than a mile to starbord. Worse yet, there were no longer ANY poker run boats in sight, and it was clear that everyone would be navigating a solo mission for this leg of the run, with the assistance of their onboard Garmin chartplotters.

Eventually, as the fog began to lift, the Boca Grande Pass was in sight, along with a few other poker run boats. It was apparent that some teams had taken an earlier “shortcut” to the protected waters along the eastern shore of Sanibel, by ducking in at Redfish Pass near Captiva Island.

The run continued to Harpoon Harry’s at the Fisherman’s Village in Punta Gorda, a destination we had visited on previous Fort Myers events. The staff at the Captains Table has a hearty lunch hot and ready, as the first arrivals made their way to the scenic dining room, overlooking the boats and Charlotte Harbor. Indeed, with such a wide variety in speeds among the fleet, the arrivals were spread out over an hour….and eventually they were all settled in and rafted up.

The afternoon course took the fleet a little further north to Gasparilla Marina, an enormous full service marina, which has evolved into an impressive waterfront community over recent years. The 1,000 boat facility is surrounded by attractive condominiums and townhomes, making this the ideal homeport for many boaters, both year-round, and seasonal. The marina staff was ready for the thirsty boats and the fuel pump meters were soon spinning wildly, as a number of poker runners re-fueled. The Nor-tech 477 paceboat positioned itself on the facing pier, so poker run teams could receive their card as they departed from the marina. In about a half-hour, the flurry of activity was completed, and the poker run fleet was on its way Southbound….next stop Useppa Island Club, a private marine community.

Located at the north end of Pine Island Sound, Usseppa Island Club is an exclusive, member-driven island that offers a truly relaxed vibe, and an escape from the mainland. Island dwellers are not typically there year-round, and the eclectic mix of individuals, mostly boaters and yachtsmen, clearly have common ground amoungst each other. Club members Frank & Milli Ricciardelli have often expressed their enjoyment of this island paradise, and more recently, George & Shannon Argyros have taken up home-ownership on the island. The couple, owners of Team Donzilla, a 43 Donzi, hosted the poker run guests, with red carpet service.  Shannon took charge of poker card handouts at the dock, and after docking their boats in the marina, guests were greeted at the waterfront restaurant by hubby George.  All poker runners were offered golf cart tours of the island, which was fun for all who attended.. Special thanks to our gracious hosts, George & Shannon, for extending this warm welcome, along with all the staff at Useppa Island Club. We look forward to making this a return visit on future poker run events!

The final leg of the run took place in the calm bay waters of Pine island Sound, and by late afternoon, the boats were settled in for the night. Special thanks to the Fort Myers Beach Fire Department, for staffing our FPC Safety Boats with four fire-rescue paramedics to ride along for the entire event. Additional thanks to Trond Schou of Nor-Tech, and Brian & Karen Connelly…for providing their Nor-Tech center console boats as safety boats for our paramedics to ride on.

The Saturday night party at the Pink Shell Resort was set up in an elegant ballroom, with a fabulous buffet dinner and aerial videos from earlier in the day on the big screen. Many awards were presented in a variety of categories, and prizes were awarded to the top three winners of the poker run!

Thanks to all who attended, and we will certainly be adding this event to the schedule for 2014!