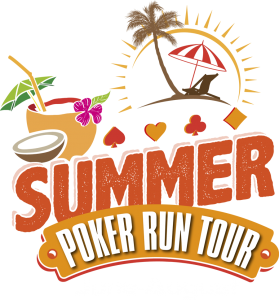 It was a whirlwind tour to say the least, and it reminded me of the days long ago, when I would load up the FPC trailer with the Harley, club magazines and poker run videos, to tour around many states for weeks at a time, visiting our club members attending poker runs in their homebased waters. Fast forward about a dozen years later, and 2013 certainly presented a very challenging agenda. Indeed, there were thousands of miles involved in getting to these events, but it was worth the journey in every way! Here’s the recap.


This event is run by Paul Robinson and a team of event volunteers from the local TOPPS Club. It has certainly evolved and matured rapidly, since the event’s inception about six years ago. Back then, Paul focused on the “Shoot Out” approach, making the speed runs the main part of the weekend agenda, along with a pseudo-poker run format, called the Black Jack Run on Friday afternoon. In just two or three years, Paul realized the poker run format should take center stage, and while the radar runs remained as part of the agenda, the Saturday poker run format dominated the weekend. Kemah Boardwalk was homebase for the earlier years, but one bad hurricane trashed that venue, and the party moved into Clear Lake. Perhaps one of he biggest highlights, most would agree, was the Friday pool party at Ken Armstrong’s house. Kenny has a major league bachelor pad…big house on several acres, hundreds of feet of dock…it’s just over the top. But when you pack more than a hundred boats rafting up as many as ten deep, park helicopters in the yard, have a crane for launching boats, put about a dozen pretty bartenders at the pool grotto bar, and pack two hundred people into the pool …well it just get’s a little silly.  Good kind of silly ….people having fun, no drama, a lot of cool hardware to view. Some fiberglass, some metal, and of course a lot silicone. Yes indeed, Texas is the land of BIG!

This one is hard to imagine if you’re from the deep south. When you look at the location on the map, and see that it’s only a couple hours drive to Northern Ontatio…you might think…whoh.. do I have to winterize my boat or bring extra layers of clothing? Well, admittedly, the 1600 miles we drove from Pompano Beach was quite the haul in the family motorhome, but the mid July weather in Northern Michigan is nothing short of …glorious!  The absence of humidity, the long hours of daylight and the cool evenings, certainly remind us that we were a long way from home…but it really was a welcome change to the hot South Florida summer.

The venue is superb in so many ways and unique in the way it is managed. For it’s tenth year in a row, the poker run was hosted by the small town of Boyne City, which commands the use of a very prime piece of real estate….a scenic waterfront park that has enough dockage for about fifty boats. Participants can launch boats at a nearby ramp, and there seemed to be a few good marina’s around the local Lake Charlevoix, for partipants to get service and fuel.  We rolled into town Thursday afternoon and were able to park our motorhome amongst some high-dollar hardware, and the who’s who of the Michigan boating scene were all rolling in. In a strange way, we Floridians actually felt quite at home among the many attendees….mostly people we had come to know in our boating circles for over a decade.

Thursday evening the welcome reception was staged high above the town’s prized Boyne Mountain Resort, a ski lodge by winter,  and recreational playground by summer. The real kick was taking the ski slope chairlift to the top of the peaks, where a mountain-top lounge/chalet hosted the kickoff party. It made for a very pleasant social mixer….and who’d of thought they’d ever ride on a ski chairlift in the dead of summer?

Friday offered plenty of scenery as the teams continued to roll into town from neighboring states and bordering countries… (Hint- can you say Canada, eh?) By Friday evening the roster reached just over 80 boats, setting a new record for the event’s 10th Anniversary.

The Saturday poker run was well orchestrated, as multiple starts kept the 80+ boat fleet in a relatively safe format in the early part of the day. After cruising through Lake Charlevoix, the poker run fleet bottle-necked into the long scenic waterway that carves through the small town of Charlevoix, with literally thousands of spectators lining the walls, and showing their appreciation fo the long parade of colorful powerboats and fun loving people. If there was an national ward for the most exciting powerboat parade on a poker run event…this event would certainly claim the coveted prize! We spent the day with BOB & ELLE BERG on Team Artemis, a 50 Nor-Tech Supervee. The Bergs, Miami natives most of the year, have taken a liking to the Lake Charlevoix lifestyle, spending their summers there with the boat, and enjoying the multitude of boating destinations throughout the area.

The poker run party culminated in the big event tent Saturday evening…and although there were no structured “event” activities slated for Sunday, a handful of powerboaters congregated at the areas most popular waterfront eatery called The Landings, located on a protected section of waterway that connects Lake Charlevoix with its South Arm. If you’ve never done this event…get in on your poker run bucket list….You will not be disappointed!