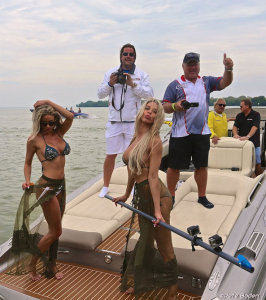 Check out the highlights below of the Florida Powerboat Club Fort Myers Poker Run weekend, as written by Speed on the Water!

After a four-year absence from organizing a poker run in Fort Myers, Fla., the Florida Powerboat Club returned to the area last weekend for an event that attracted 35 boats and was based at the famed Pink Shell Resort on Fort Myers Beach and nearby Salty Sam’s Marina. Given the club’s time away from the area and marginal weekend weather forecast, FPC president Stu Jones said he was pleasantly surprised by the turnout.

“I thought we’d have two dozen boats and call it a day,” he said. “We had 10 more than that. Everyone raved. Everyone loved the Pink Shell Resort.”

On Thursday, FPC staffers and several participants in town early for the weekend were treated to a tour of Nor-Tech Hi-Performance Boats, which is based in Fort Myers. Nor-Tech principal Trond Schou and production manager Heinrik Margard guided the group through the plant for almost three hours, according to Jones.

“That was a treat and a really nice way to start the weekend,” said Jones. “And Nor-Tech also was kind enough to provide us with a 42 Monte Carlo sportboat and a 39-foot center console as support boats for the weekend.”

The following afternoon, Jones and the building fleet for Saturday’s poker run headed north on what he called “a recon mission fun run” for participants from outside the Fort Myers area, which is notorious for its sandbars and shallow water. Jones said that the outing enabled participants to get a “GPS footprint” that would increase their comfort level for the following day’s greater-distance event. The group ended the day with lunch, which led into a late-afternoon happy hour at Bootleggers Waterfront Barbecue at Salty Sam’s Marina.

This article was originally posted on Speedonthewater.com.