Key West Recap From Speed On The Water Magazine

Check out the article below, published in Speed On The Water Magazine (SOTW), November/December, Key West Issue! The great write-up from Matt Trulio has already captured the attention of many boating enthusiasts and we don’t want you to miss it! Photos by Florida Powerboat Club, Pete Boden.

Don’t forget to pre-order your copy of the 2017 Year in Review Magazine from SOTW! The third edition publication will be released at the end of January, but only limited copies are available — CLICK HERE to reserve yours now!

BITTERSWEET ANNIVERSARY
In the face of tragedy, the Florida Powerboat Club reached a milestone anniversary with its 25th annual Key West Poker Run.

With Hurricane Irma careening into the Florida Keys just two months before the Florida Powerboat Club’s 25th annual Key West Poker Run—the organization’s signature happening—it was no small wonder that the event even came off at all. So much of the supporting infrastructure, from Grove Harbor Marina in Coconut Grove to Gilbert’s Resort and Tiki Bar in Key Largo, was heavily damaged by the storm. That left Stu Jones, president and founder of the club, and company to improvise lunch and docking arrangements for what would be a 185-boat fleet and some 850 people heading from Miami to Key West on Wednesday and Thursday.

“As usual, we had our two-day departure format and, as usual, it was heavily weighted toward Thursday,” said Jones. “We had 650 people traveling—650 people to organize lunch for—that day. It was the first time we’ve ever had to have four separate lunch venues.

“Hurricane Irma knocked out a lot of the facilities we would use going down to Key West,” he continued. “We didn’t have the full use of the docks at Gilbert’s, for example, but I was able to get docks at The Anchorage and shuttle people by pontoon boat to Gilbert’s for lunch. Managing logistics for this year’s Key West Poker run was our biggest challenge, ever.”

And quite suddenly, all of that hard work became a side note to tragedy when poker run participant and Outerlimits Offshore Powerboats principal Joe Sgro sustained what would be fatal injuries when his new 50-foot canopied V-bottom rolled in the protected Intracoastal waters off Marathon. Fellow Outerlimits owner Michael “Doc” Janssen did all he could to keep Sgro alive for his emergency evacuation by medical helicopter, but Sgro died en route to Miami.

“We tried to exhale and keep it all moving along, but it was heartbreaking,” Jones said. “The takeaway is that you can never let your guard down on safety. We made it almost 25 years without a fatality. Even with the safest organizers with the most aggressive safety programs, you can’t take anything for granted if you want to have a good outcome.” 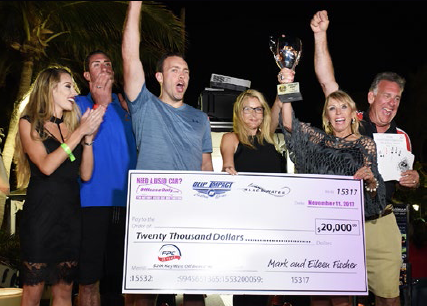 Jones credited the club’s “accelerated safety management program” from preventing another tragic outcome the day before when a passenger was ejected from another Outerlimits V-bottom in Biscayne Bay. The passenger sustained serious injuries but survived.

“I believe that outcome proved the value of our enhanced program with smaller safety boats in Biscayne Bay,” he said. “The presence of safety personnel and paramedics prevented it from being worse. “This year’s Key West Poker Run was bittersweet,” he continued. “We lost an industry great in Joe Sgro. We had a successful overall event—this was the most people we’ve ever had in our Key West run—but after 25 years I thought we were going to be able to get through and keep our safety record intact.”

To some degree, Sgro’s death overshadowed both the FPC poker run and the Super Boat International Key West Offshore World Championships—while not competing in this year’s SBI event, Sgro was a veteran offshore racer. But like the races, the poker run festivities went on. They included the ever-impressive Poker Run Village with a bodypainting display on Thursday night, as well as the traditional poker run awards banquet at the Conch Republic Seafood Company on Saturday night—with the best dinner turnout in the history of the event, according to Jones.

“Usually about 80 percent of the people in the run show up for dinner,” Jones said. “The rest find something else to do—get lost in Key West or have their special dinner—which is fine. This time, we had 850 people in the run and750 turned out for dinner. And staff at the Conch Republic pulled it off. I think it helps that we start at 6 p.m. and serve in waves. That keeps people coming and going. 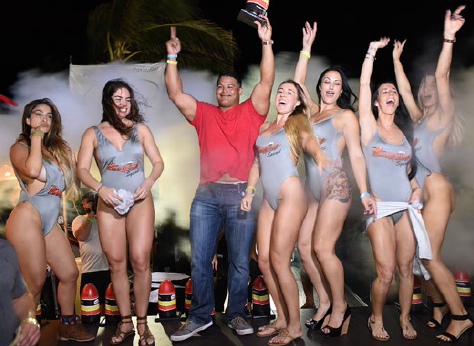 Ray Aquit and the crew from Team Hammer Time were excited to win an award Saturday night for most spirited crew.

“The Poker Run Village was great, as always,” he continued. “Once again, we made the best of our smaller footprint as we lost one-third of the space to a condominium development three years ago. It was nice that Brett Manire of Performance Boat Center had a Wright Performance Powerboats 360 catamaran in the village as well as at the docks because the village really has, for the most part, turned into a center console show. And the show in the water also was as good as ever. Nor-Tech brought its 56-foot center console with four Cummins diesels, Deep Impact had a new 399, Midnight Express had a fantastic display and there were 53-foot Hydra-Sports center consoles. And of course, we had an amazing display of highperformance catamarans and V-bottoms.”

Back at his headquarters in Pompano Beach, Jones is working on a motorcycle rally/fundraiser he organizes and more. The 2018 poker run season is right around the corner and, while he gets something of a break around the holidays, Jones never really stops working.

“The best takeaway from Key West this year is that our sport is alive and well—it’s at the top of its game,” he said. “The manufacturers blew it out of the park with their latest boats.

“I love the sport, I love the people in it andI love the support from the manufacturers,” he added. “But I also feel like I need to keep doing what I do and to make it better. That’s not just going to happen by itself. This is a truly rewarding sport, but it can bite you if you let it.”