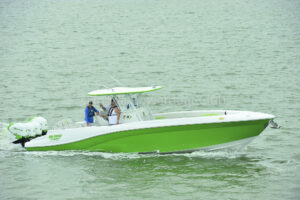 Check out this article about Stu Jones and transition to including center consoles in Florida Powerboat Club Poker Runs!


About six years ago, Stu Jones, president of the Florida Powerboat Club, was facing a critical crossroad in the organization’s history. Should he restructure his poker runs to encourage owners of center console boats to participate or continue to cater to the faster, high-performance offshore go-fast boats that had traditionally made up the fleet at the events?

Owners, he discovered, were buying center consoles because they could carry more friends. That, of course, was all good news to Jones because he could recruit more members to his club. Today, performance center consoles are commonplace on the poker run circuit. Here are some fast center consoles that are upping the ante.

Measuring 43 feet long with an 11-foot-9-inch beam and weighing 18,000 pounds, the BlackWater 43 is available with a stepped or nonstepped bottom design, and the transom deadrise is listed at 24 degrees. Maximum horsepower is listed at 1,881, and the boat can be equipped with triple or quad outboards. The boat was developed with comfort and function as the leading criteria. The cockpit can be laid out with one or two rows of offshore-style bolsters at the helm, a sun lounge on the front of the console and optional forward seating in the bow. There are folding transom seats, a slide-out cooler and a bait-prep station. Belowdecks, the BlackWater 43 has an enclosed head with a full stand-up shower, a galley, and sleeping space for four.

The newest and biggest boat in the performance center console game, the 60 Pied-A-Mer is 60 feet long with a 15-foot beam. The twin-stepped bottom has a 22-degree deadrise at the transom, and the boat tips the scales at 36,000 pounds. When powered by quad Seven Marine 627s, the boat has an estimated top speed of more than 70 mph. It can also be powered by diesel inboards with surface drives that Midnight Express says will push the boat to speeds approaching 90 mph. With fuel-capacity options exceeding 1,000 gallons, the 60 Pied-A-Mer should have excellent range.

This article was originally posted on BoatingMag.com