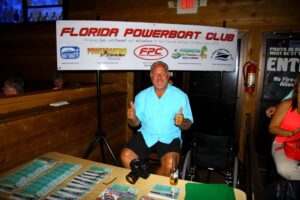 Check out this great feature from Offshore Only, showcasing our own Stu Jones’ Poker Run Road Trip!

Since the early 1990s, Stu Jones of the Florida Powerboat Club has spent a lot of time organizing poker runs and building his business. That means mapping courses, securing permits, setting up hotels and dockage, hiring photo/video helicopters and shooters, contracting safety assets and dealing with the assortment of large and small personalities that comprise his club’s membership. There are always highs and lows in his job—a few years back Jones even took a punch from a clearly unhappy client—but for the most it all fades away come June because the aptly named Sunshine State is oppressively hot and humid in the summer.

“Things really do slow down in the summer months in South Florida,” said Jones.

You’d think that when poker run season ends in Florida Jones wouldn’t want to get anywhere near a poker run, that he’d enjoy time away from the kind of events he organizes for a living. You’d figure that attending other organizers’ poker runs would be the last thing he’d want to do with his time off, that he’d run for the hills, so to speak, and spend the summer camping in the Colorado Rockies.

Of course, you’d be wrong.

This summer Jones, his wife, Jackie and their 9- and 12-year-old sons spent their time attending poker runs. Stu and Jackie Jones started without the kids by flying to Biloxi, Miss., for the Smokin’ The Sound Poker Run and followed it up by hitting the Texas Outlaw Challenge in Houston. They returned to Florida, piled the boys into their 85-foot motorhome and drove to Canada, where the kids got to spend a little time with their grandparents. (Stu Jones is from the Toronto area.)

“I wanted to do a run with the Performance Boat Club of Canada while we were there, but the timing didn’t work out,” said Jones.

From there, the Jones family drove to Michigan to the Boyne Thunder Poker Run and followed it up with the Pirates of Lanier Poker Run in Georgia.

“I went from running in Mark and Eileen Fischer’s 52-foot Nor-Tech in Boyne Thunder to a 31-foot Formula in Lanier,” said Jones. “It was a good experience.”

This article originally posted on OffshoreOnly.com.