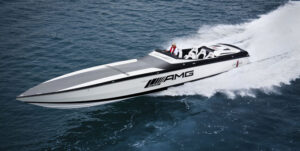 The 1st Annual Bimini Smugglers Run was originally scheduled for late June, as part of the FPC’s annual Bahamas Poker Run. With foul weather coming in from the tropics, the first round was cut short, as about fifteen teams returned to the mainland to avoid the rough seas and rains that followed.  Sept 14th was scheduled as a re-make of the June event, and six poker run teams totalling 30 participants headed out from Miami and Fort Lauderdale to brave the gulf stream crossing. Northeast winds produced seas of 6 to 8 feet, including swells that often exceeded 10 feet, but these crews were bound and determined to make the crossing. Boats ranging from a 33 foot Powerplay to a 42 foot Cigarette, proved tough enough for the mission, and by early Friday afternoon, the entire group settled in at the Bimini Big Game Club for conch salad and rumrunners.

Bimini Bay Resort & Marina hosted the group, and with empty slips everywhere, it was apparent that the majority of transient boaters had decided to stay on the mainland for the weekend. But there was plenty on the agenda for the FPC clan, with activities on land that included golf cart tours into the quaint villages of Bimini, or relaxing at the Bimini Bay Resort infiiniti pool. Saturday, three of the six boats attending traveled south from Bimini and rafted up at Honeymoon Harbor, for a stringray feeding that brought more than a dozen local rays out for the exciting rendezvous. While it may have been a little intimidating at first for the newcomers, most participants were amazed at the friendly, docile nature of these beautiful creatures, and eventually became courageous enough to try a little hand-feeding.

Saturday night took the group back to the Bimini Big Game Club, where the poker cards were drawn, and Anton Holstrom from SC, won the Bimini Smugglers Run with the highest pair. Later, the group cruised the island and visited Big Johns, the town’s favorite entertainment hotspot.

At least three of the boats returned to Fort Lauderdale on Sunday, reporting back that the seas had laid down and the crossing was much better than the trip over just two days earlier. One of the remaining boats took to the local waters for fishing, while the crew on board Mark Fischer’s 36 Deep Impact, explored the very exclusive island, Cat Cay..which is just eight miles south of Bimini.  Island officials granted a private tour of this beautiful island escape, which features a massive marina, private airstrip, and well over one hundred fabulous homes, many of which are classified as island estates valued at several millions. With membership initiation at $ 25,000 and approximately  it’s a great way to escape the crowds, be treated like royalty and enjoy a relaxing getaway in the tropics..just fifty miles from Miami.

Sunday evening, for the final soiree, about a dozen guests enjoyed the hospitality extended by Patrick Sullivan of Performance Marine and incoming member Andrew MacMillan, a New Zealand native who resides in Singapore and traveled half the globe to attend the Bimini Run. Marinated steak and fresh lobster tails were on the menu, along with an assortment of fine wines…a brilliant ending to this late summer Bahamas fling.

See all the Cat Cay and Bimini Smugglers Run photos online, at www.flpowerboat.com.